In 2021, the Falls Township Board of Supervisors moved full steam ahead with several large-scale developments and redevelopment projects expected to bring thousands of new jobs to the township and fill vacancies, all while working to improve quality of life for Falls residents.

Several redevelopments are underway in 2022 after the Falls Supervisors greenlighted projects in 2021. The most noticeable space repurposing is the 1,800-acre Keystone Trade Center, formerly U.S. Steel, which North Point Development is working to transform into up to 15 million square feet of warehousing.

The developer completed phase one and began embarking on the second phase of the expansive project last fall. Once complete, the 20 or more state-of-the-art industrial warehouse buildings would be home to various Fortune 500 companies, creating 5,000 to 10,000 new permanent jobs.

The board finished out 2021 by paving the way for redevelopment of the former Solvay tract. The Supervisors, in 2020, reviewed a sketch plan for Stalwart Equities’ nearly 1 million-square-foot warehouse planned for 95 acres along the Delaware River. In December, the board approved a minor subdivision and lot line change in preparation for the forthcoming land development plans. Once built out, the redeveloped property is expected to provide more than 500 new jobs.

The board, over the summer, set the wheels in motion for a complete transformation of a Lincoln Highway abandoned car dealership into a self-storage facility.

In 2021, the board advanced plans for a pair of new eateries to open at the former Macaroni Grill and Pier 1 Imports. By spring 2022, Raising Cane’s Chicken Fingers is expected to open a restaurant, which features indoor seating, a covered patio, and two drive-thru lanes at the former Macaroni Grill. By July 2022, Mission BBQ will open in roughly half of the former Pier 1 store, at Commerce Boulevard and Oxford Valley Road. Like Raising Cane’s, Mission BBQ will offer a covered outdoor dining area.

To help fill vacancies, the Supervisors modified the zoning at the intersection of Arleans Avenue and Lincoln Highway from shopping center to highway commercial zoning to permit a Wawa to locate at the former home of Arosso, A Touch of Sicily. The restaurant relocated inside the shopping center and opened at the end of 2021.

For the 30th consecutive year, the fiscally responsible Falls Supervisors adopted a spending plan that holds the line on taxes. The 2022 budget maintains the 7.22 millage rate enacted in 1992, when a gallon of gas cost $1.05 and the average home cost $122,500.

Falls maintains its services – and offers trash and leaf pickup free of charge – without instituting an Earned Income Tax, as many other towns have done.

In spring 2021 the Falls Supervisors launched a litter cleanup effort to rid roadways of trash and litter. As part of that effort, the board asked police to step up enforcement efforts to help curb littering and dumping. Falls also approved a maintenance services litter collection agreement with PennDOT to allow the township’s public works department to clear litter from state-owned roadways.

To help with litter prevention efforts, the board, over the summer, adopted an ordinance that prohibits the release of helium balloons and luminaries. Released balloons contribute to litter and pollution and have been known to kill wildlife who mistake ribbons and balloons for food.

Falls also continued its annual road program with milling and overlay improvements to Elderberry Drive, which amounted to improvements to eight township roads and more than $1 million under the amount budgeted.

In February, the board adopted an ordinance amendment to prohibit smoking on any township property – including the municipal campus – except in designated areas. The update mirrors what was enacted at township-owned parks, which prohibits smoking on and near playgrounds.

The board also adopted an ordinance aimed at cracking down on human trafficking operations. As a preventative measure, the regulation requires all massage establishments and alternative therapy establishments obtain annual licenses and mandates that all massage therapists be state licensed.

As a means of preventing catalytic converter thefts and pawning of stolen items, the board last fall, revised an ordinance that makes it more difficult for scrap yards and pawn shops to fence stolen goods, including the popular vehicle part. The stepped-up measure provides potential victims of theft time to recover their stolen property.

In October, the Falls Supervisors appointed Erin Mullen to fill the vacancy left from Supervisor Jeff Rocco’s resignation. Mullen, a Philadelphia native who has lived in Falls since 2008, will finish Rocco’s term, which continues through Dec. 31, 2023.

While the COVID-19 pandemic is anything but a welcome addition, the popularity of outdoor dining that stems from it became a permanent fixture in Falls. Throughout much of 2020 and 2021, the Supervisors had authorized temporary outdoor dining. Last summer, the board adopted an ordinance to permit outdoor dining on a permanent basis.

Falls Township Police Department launched two separate initiatives in 2021. In February, the department debuted the Supporting Recovery Program, which pairs a certified recovery specialist with a Falls Township police officer for overdose and calls related to substance abuse. Falls Police was the first department in Bucks County to implement the program, which is funded through a grant from the Bucks County Drug and Alcohol Commission Inc. The commission pays the salaries of the certified recovery specialists assigned to work with the police department. Specialists also provide emergency medical care, promote treatment, and provide follow up focusing on access to care, transition in care, support for long-term recovery, access to health care benefits and providing connections to physical health related needs.

In December, Falls and Middletown police, in conjunction with Bucks County, launched an initiative that brings a specially trained social worker to police calls involving mental health issues and domestic disputes. The two-year program is fully funded through a grant from Bucks County. Each of the police departments have a human services co-responder in-house who follows up on calls for service involving mental health components or domestic violence.

Thanks in large part to a $55,029 Greenways, Trails and Recreation Program grant, the roller hockey rink at Falls Township Community Park received a makeover recently. The rink was resurfaced, cracks were sealed, the dasher board was replaced, fencing was restored, and the structure was painted. 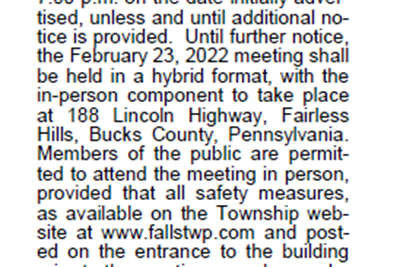